Almost three years, the white and gold set in the peyote technique was waiting for the finish.

It was the first bracelet made using the peyote technique. I learned, I repeatedly slept and sewn. In the end, it turned out that something does not work for me and it came out be so simple, something was missing. I was still learning peyote technique and I made two balls with the same beads, they were not perfect, so I also put them off later. And so the set lay for three years and waited for the idea and finish.

Fortunately for the set there was a fashion for tassels, which I combined with fire polish beads, so the balls gained in length and grace. 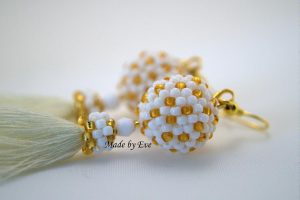 I also learned to make picots, which I finished a very modest bracelet. I sewed a magnetic gold clasp. 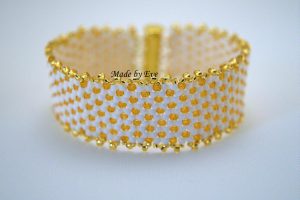 This is how the white and gold jewelry set looks now. 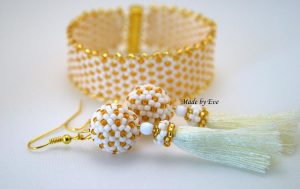 All presented works are made by me. I am also the author of the pictures. If it is different – I clearly indicate where the photos were taken from. I do not agree to copying and using photos without my permission (if you are going to advertise me – I would also like to be informed).